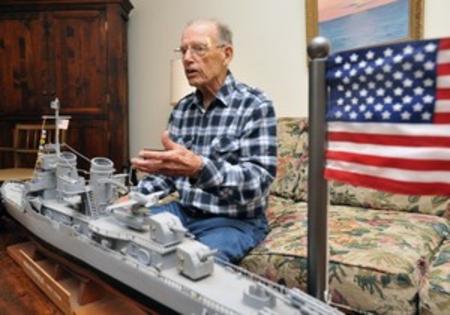 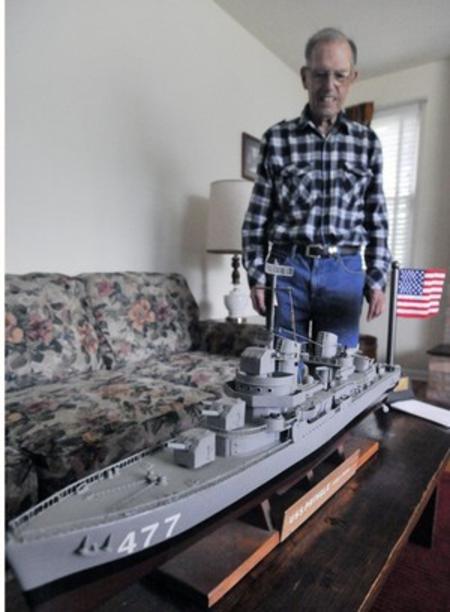 Link to an article

Northfield man aboard the USS Pringle

Henderson “Henny” Hemphill is a decorated World War II veteran and a recipient of the Purple Heart.

But when the 90-year-old Northfield resident is asked about how he earned that medal, he often recalls the sacrifice of other men with whom he served.

As dawn was breaking on April 16, 1945, Hemphill was on damage-control duty aboard the USS Pringle, when it fell under attack by Japanese kamikaze pilots while on radar picket duty near Okinawa.

On the other side of the ship was Chief Pharmacist’s Mate Wallace Cable:

“Chief Cable was a good 6 feet tall, maybe 200 pounds, and very, very friendly. He would always do whatever he could to help you if you needed help. … He was working as a pharmacist’s mate and was qualified to do pretty much anything medically on the ship. … When we came under attack, an explosion knocked one of the torpedoes off the rack above the first aid station where he was stationed. It fell on him and trapped him. He tried to get free, but then another torpedo fell down on him and cut his head clear off.”

Hemphill heard the news of Cable’s death just seconds before a kamikaze pilot crashed into the Pringle, splitting it in two.

“I was thrown overboard and spent about two and a half hours in the water until another boat came to pick us up,” said Hemphill, who watched the Pringle sink in just six minutes.

As Hemphill was floating in the water, he saw the ship’s Chief Water Tender Alfred Wolf pop out of the water about 5 or 10 feet from the wreckage:

“He was from Philadelphia, and I found out a few years later that I was neighbors with his sister. The Navy had sent a letter to their family but it didn’t say too much, other than he had died. And I didn’t tell them too much, either, because it was too gruesome. … He was in the bottom of the ship when the plane hit, but he was still somehow able to make it topside. But he had been scalded very badly and was in pretty bad shape. Eventually he just slipped below the water and drowned.”

A reported 69 men were killed and another 70 were wounded in the attack.

And even though he lost friends and came close to losing his own life, Hemphill — who went on to become a father and grandfather — said he doesn’t reflect too often on the events of that day.

“When this was all happening, your thoughts were more or less on trying to keep yourself alive,” Hemphill said. “But when people ask me about it, it brings back memories and that’s when you remember that it was a sad thing.”