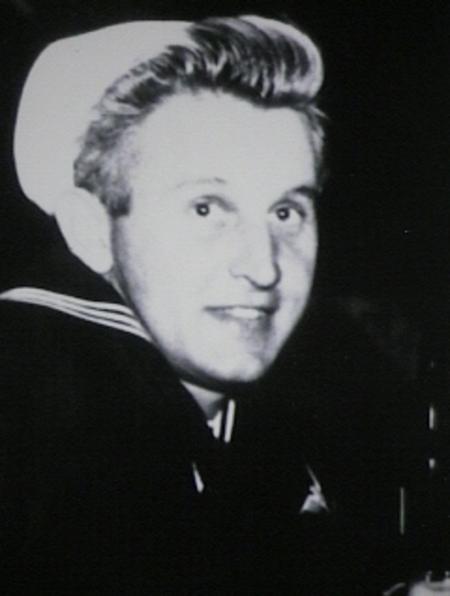 After the ship went down, Hal Yearwood was in a life raft with me. Both of us were in pretty bad shape.  I’m not sure which ship picked us up, I was semi-conscious at that time, but I know it wasn’t the USS Hobson.

Mathew Anthony Dymek served on the USS Pringle as a Radar Technician in the Plotting Room, he's currently living in the Philadelphia PA. area
Mat on  "lonesailor.org"  (off-site link)


"My job was radar maintenance so I was in the Plotting Room  during General Quarters.  I had to know how to keep the radar transmitter and other equipment going.  I also had to have at least 200% of all the replacement parts on hand.

Working in the Plotting Room, I knew a lot of things I wasn’t allowed to talk about, like the frequency of the magnetron, I had to swear not to reveal that to anyone.  Also, I heard people talking about the next invasion of the next battle or conflict that we were headed to.  That information wasn’t generally known by the crew.  The Captain sometimes called me in and asked me to mingle with the crew, and kinda relax them, help keep their confidence up.

I was in the Pringle plotting room the morning of 16 Apr 45, I remember hearing our CAP (Combat Air Patrol) saying over the radio “were gonna leave to refuel”, that’s when it dawned on me, this could be it, and it was.  We were a dead target sitting out there without our CAP.  From that time on things got a bit tight, I remember the silence, I still can hear it, only once in civilian life have I ever heard that silence.  Then I heard a noise like I never heard before, and thought, hey!!! this is it, then the lights cut out.

The plotting room door had dog hatches on it and I couldn’t open it regardless of what I did, the door had buckled. Two guys in there with me also tried to get the door open, but they couldn’t open it either.  One of them kicked a dent in it, creating a small opening, that’s how I got out, a bigger guy wouldn’t have gotten through it.

Out on the starboard side of the ship I ran to the stairway and noticed the ship had been blown in half, I headed to the bow and spotted a wounded sailor leaning against the bulkhead, another shipmate and I threw him over the side.  The other shipmate said in a loud voice “the ship’s going down, you better jump off”

I looked down, the bow was high in the air, maybe 30 or 40 ft up,. I jumped off with shoes and pants on plus some tools. I remember swimming real fast and looking back to the ship. I saw the numbers 477 very vividly, as they slide beneath the water. I started swimming again as fast as I could. I saw a guy I knew and asked him to hold me up a minute, cause I didn’t have a life jacket on, but he said, “you gotta worry about yourself now.”  Somehow, I didn’t react negatively, I just keep swimming and got very tired, I mean real tired, I tried taking my shoes off and started to go under, things were getting foggy and I heard bells ringing. I was totally exhausted when someone grabbed me by the neck, I remember saying “I can’t move any part of my body”, and I just let go.  He said something or other as he was dragging me by the neck, I suspect it was Dr Dana Mitchell that pulled me to the raft, where some hands grabbed me and pulled me into it.  I just did nothing but sit there.  I remember hearing all sorts of voices, making statements like, “the sharks will get us”, and “no one will pick us up”, and some other irrational things.  Then I heard a song or two for a short bit, and voices saying things like “look, whoever ain’t hurt much, get off the raft, or all of us will sink,” you could hear real pain in some of their voices.

I was kinda unconscious, in and out of it, getting cold, then colder.  For how long I don’t know. Then I remember a voice saying, “I think I see a ship on the horizon”, then silence, then someone pulling on my neck, and pulling me up. When they got me on board, I think I said I’m all right, and sorta fell on the deck, Next thing I remember, they were carrying me down below.  They put me on a bunk and gave me a drink or sip of something, that surely didn’t make me feel better, only more tired. Then I heard guns firing and I remember thinking, it didn’t matter, and I guess I just passed out.

From that moment I don’t remember anything for quite a few days, after which I found myself on another ship, and going down below and asking for some decent clothes to put on. The attendant, a sailor said, Ok! but you gotta have a chit from your Captain, I’m pretty sure that near the store I saw a sign that read, Red Cross, after telling the attendant I don’t know where anyone is. I received something and walked away.  I remember I couldn’t swallow anything due to pain in my throat and chest area.  That stayed with me for many days. It’s difficult to tell how bad I felt about not being offered anything to wear, and being told, you gotta get a chit from your Captain.