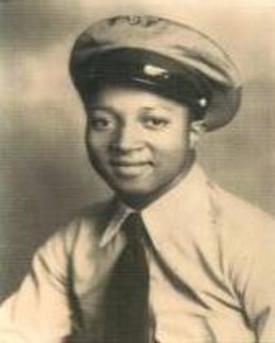 Petty Officer 3rd Class Edward Roy Burton was 16 years old when he enlisted in the U.S. Navy. At that time in 1943, his mother had to sign papers in order for him to join the Navy. He was born in Watonga , OK around or about 1926. His parents were Freeman and Dorothy Burton. When the family moved to El Reno , OK he attended Booker T. Washington School. During WWII, he was assigned to the USS Pringle, served 1-1/2 years as a Steward’s Mate. On April 16, 1945, a bomb dropped by a Japan Suicide plane (Kamikaze) sunk his ship nearOkinawa , Japan . As told by his sister, Parthenia Burton-Lewis, when the ship was hit, he dived into the waters several times, and was advantageous in saving several of his fellow shipmates, he dived in one more time, and never came back up alive. He was awarded a purple heart for his efforts. PO3 Burton was also the first Black military person from El Reno to be killed in WWII.

In November, 1945 in his honor, the name of Dunbar Park located in the Northwest community, was changed from to Burton Park . Mr. Barbour an El Reno Lawyer, was influential in executing this action.