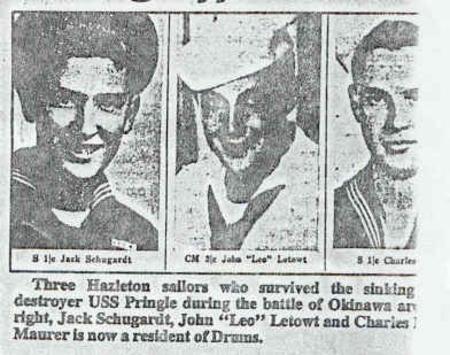 Jack Schugardt, John "Leo" Letowt, and
Charles Maurer as they appeared in a
Hazelton, PA newspaper

Jack H Schugardt was a Yoeman in ships office on the USS Pringle with
three other great guys, Andy Balog, Bill Herman and Bill Mundt.

Jack Schugardt:  "We were in the water about 3 hours.  We had a Jap plane that was diving and shooting at us. It was one hell of a day.  We had a great crew . . . we were Navy and had a job to do, and we did it.  We were very proud to be crew members of one great ship."

Jack Schugardt:  "Cameras weren't allow on board ship, the pictures of survivors you have on the website, were taken by official navy photographers on the USS Starlight [AP175], a transport ship as it brought Pringle survivors back to San Francisco, except the wounded"